Pregnant in a Refugee Camp 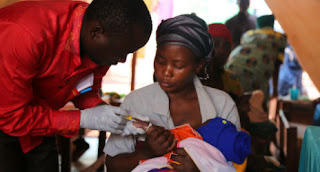 Editor's note: This post was originally published on the International Federation of the Red Cross and Red Crescent Societies webpage.

Citegetse Laurence is due at any moment.

Literally. “I’m past nine months pregnant,” she says with a grin. A maternity ward nurse at the Tanzania Red Cross Society hospital in the Mtendeli refugee camp, she is more than familiar with the ins and outs of giving birth. And as a refugee that recently escaped the violence of her home country of Burundi, she’s more than familiar with the challenges of being pregnant in such an environment. Unfortunately, Citegetse is not alone.

June 20 marks World Refugee Day, a day recognized by the United Nations to highlight the situation of people like Citegetse. She is just one of nearly 20 million refugees around the world; 42,500 people are forcibly displaced every day.

The doctors at this hospital see an average of 120 patients per day. With refugees being transferred to Mtendeli from the overcrowded Nyarugusu camp three hours to the south at the rate of 1,500 a week, that number only continues to grow. Of those 120 daily patients, on average, 50 are pregnant.

Walk into the hospital any day of the week and you’ll hear the cries of newborns and see their mothers breastfeeding. Walk throughout the camp and you’ll see pregnant mothers everywhere. One doctor tells me it that the high fertility rate of Burundian women is their way of replacing the many they have lost. It’s a heartbreaking way to think about new life in the world.

Wireyeimane Anittra, 23, fled Burundi in September, just over 3 months pregnant. She’s one of the lucky ones; her husband and son managed to escape with her. She was the first woman to give birth in the new hospital. She said she felt better once arriving because she was supported by medical staff. In appreciation, she named her son Sospeter Mtendeli; Sospeter after her nurse and Mtendeli after the hospital. Just two weeks old, he nurses at her breast, ten tiny fingers and toes, soft wavy curls plastered by the heat on his head.

The maternity ward at the Red Cross Mtendeli hospital is clean and inviting, a rarity and refuge in an otherwise chaotic environment. There’s no ultrasound machine. The head of the hospital, Dr. George Lukindo, teaches staff to read the signs of fetal stress through other measures. Electricity isn’t always a given, so equipment is often sterilized through propane fire. But there is an oxygen machine and heat lamps for premature babies. Patients receive prepared breakfast, lunch and dinner and the beds are larger than many maternity wards across the continent. Currently caesarian sections have to be referred to the local hospital but plans for an operating theatre will enable doctors to perform them onsite.

According to Dr. George, one of the biggest issues is that pregnant mothers don’t come into the hospital until just hours before birth. To counter that, the Red Cross Health Information Team (HIT) , refugee volunteers who go door to door to let people know about service availability and health promotions, have been spreading the word about the hospital, particularly to pregnant women.

Citegetse lost her first child and husband in Burundi right before she fled. In addition to working here, she has gotten her prenatal care here and plans on giving birth here. While the memories of her family still haunt her, she finds a joy in her work in the maternity ward.

“I love my job,” she said. “It is joyful to have social relationships with others and not think about the past.”

The International Federation of Red Cross and Red Crescent Societies (IFRC) has launched an emergency appeal of 5,245,197 million Swiss francs to support the Tanzania Red Cross Society as it responds to this unfolding crisis. The appeal aims to assist 250,000 refugees in the Nyarugusu and Mtendeli camps through the provision of basic health care, water, sanitation and hygiene promotion, shelter, disaster preparedness and risk reduction and capacity building.

The American Red Cross shelters, feeds and provides emotional support to victims of disasters; supplies about 40 percent of the nation's blood; teaches skills that save lives; provides international humanitarian aid; and supports military members and their families. The Red Cross is a not-for-profit organization that depends on volunteers and the generosity of the American public to perform its mission. For more information, please visit http://www.redcross.org or http://www.cruzrojaamericana.org, or visit us on Twitter at @RedCross.
at 8:27 AM No comments: