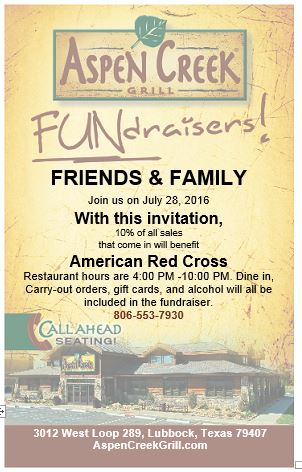 I’ve always believed that a person’s office is a reflection of its occupant’s values, a glimpse into their world from an outsider’s perspective. Walking into Jennifer Trengove’s office, you wouldn’t get the
feel that you’ve walked into a typical Major Gift Officer’s work area; there’s no extravagant grandeur, no heavy set mahogany furniture and fake corner plants collecting dust. There’s also no pictures of Jennifer with high-powered people casually shaking hands or cutting a ribbon with dangerously over-sized scissors; the room is, for the most part, simple, perhaps the only vestige of splendor being a picture of a Red Cross nurse draped in the American flag that hanging on the wall unassumingly behind her desk. For other development officers, this may be too simple, but I think it fits well with Jennifer and, for an agency like the Red Cross that assists families after they have lost everything to disaster, less is definitely more.


Jennifer is one of a handful of paid staff in the South Plains Red Cross office, a rarity in an organization that is overwhelmingly a volunteer workforce. As the Major Gifts Officer, Jennifer is tasked with soliciting and developing large donations and is an Ambassador to the Lubbock Chamber of Commerce. It’s not an especially easy job given that she covers thirty-five counties in the panhandle region. A day in her heels translates to long hours and driving. Tons of driving. Speaking with Jennifer, though, I feel that she wouldn’t have it any other way. Previously, the Scottsdalian-turned-Lubbockite worked in sales, an experience much like her current work. In fact, it's what led her to the Red Cross. “I was working for an advertising company and one of my co workers went to work for the Red Cross.’ I remember thinking, ‘The Red Cross? How do you go from advertising sales to the Red Cross?’” Fate answered Jennifer's question soon after. “In the meantime, a lady I know bought a table at the Volunteer Symposium that was hosted by the Volunteer Center of Lubbock… the center sent me a survey beforehand about our values. They made these lanyards with three organizations here in Lubbock and three causes that matched our interests. One of mine was disaster relief. I thought, how can I volunteer and go to work full time and raise my daughter, and this position popped up! It was a sign, the best of all worlds.”

Motivating people to give is never easy, though. Jennifer battles misconceptions among donors that seem to share a common theme. One is a common belief that the American Red Cross is a federal agency and doesn’t need donations. Jennifer explains: “We hold a government charter. All that means is that the government has written a specific law that makes us responsible for certain duties; service to the armed forces and disaster relief. We’re a nonprofit, we’re not part of the government.” It's not the only problem that people bring up. “Another issue is transparency; how much is what a person is giving actually going to the mission? The Red Cross, our latest statistics, show that 90% of donations go directly to the mission. That’s ninety cents for every dollar, which is amazing.”

For Jennifer, these problems detract from the positives of donating to the Red Cross. That includes huge steps on the national level. “Our new CEO, when she came into the job a few years ago, we were $600 million in debt, with a $200 million operating deficit. Today we’re debt free, we’re in budget. I think it speaks a lot about or mission and that we care about being good stewards of the donor’s money and being cognizant of how we spend money.” Most of all, she credits the weight of the mission for why people give, a spark that donor feel when they understand where their money is going to a trustworthy cause. “People are empathetic to suffering, to families whose home burns down to the ground or not having a place to live because of a tornado. They hear about our work after the earthquakes in Nepal or Haiti. They feel that connection to our mission.”

That’s Jennifer Trengove: dog aficionado, mom, Major Gifts Officer for the American Red Cross. While that seems like a full plate, it doesn’t look like Jennifer’s slowing down anytime soon; “I love working here – it’s great. It’s not just about the numbers; it’s about the people.”

Interested in giving to the Red Cross? Good idea, so take the next step. Contact Jennifer at Jennifer.trengove@redcross.org.

Steven Lara
Volunteer - American Red Cross
at 10:04 AM No comments: